The city is built on the peninsula that dives into the Orestiadalake. At an altitude of 623 m between the large mountain ranges of Vitsi and Grammo and having very nice climate, it is considered to be one of the most beautiful, traditional and enchanting cities of Greece, with a splendid history which goes back many centuries.

Many elements belonging to the byzantine civilization can be found to this day in Kastoria; Byzantine walls, Byzantine churches, traditional mansions of unique architecture, an integral part of the modern city which constitutes an International Fur production and trading center. The beautiful natural environment with the dominant position of the Lake of Kastoria composes the city’s identity.

The lake of Orestiada in Kastoria is considered to be one of the most beautiful lakes of Greece from a morphological point of view and it has been declared a “Monument of natural beauty” by the Ministry of Civilization.

It is estimated that it was formed approximately 10 million years ago (Miocene epoch). Its size today is approximately 28 km2 and its greatest depth is approximately 90 m. The existence of a large diversity of plants, animals and fish is remarkable.

The Hellenic Ornithological Society has included it in the list of the most important areas for birds in Greece.

For a few days, almost every winter, the lake freezes creating a totally different aspect of the landscape.

Book now and...
Book now and take advantage of our unbelievable deals. The...
VIEW MORE
Accommodation 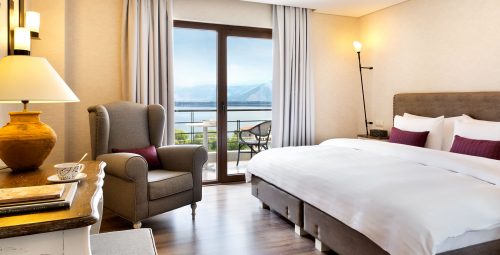